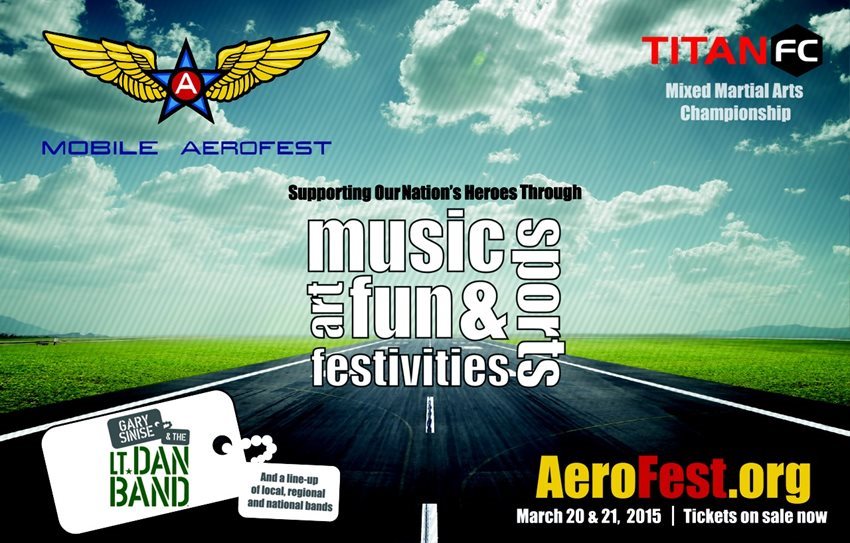 Mobile, AL—November, 19 2014 The Mobile Aerofest and Mobile’s Arts Alive! Festival today announced that the highly innovative, interactive arts festival that played a key role in the evolution of Mobile’s downtown Arts District will be presenting its annual event as part of the Mobile Aerofest, starting in March 2015.  The Arts Alive! Festival, now in its eleventh year, has become one of the Gulf Coast’s premier celebrations of the arts featuring three days of varied artistic experiences and interactive hands on activities.

"The stars have really aligned for us to forge this dynamic partnership with the Mobile Aerofest,” said Arts Alive!’s David Calametti. "As Arts Alive! has grown over the years, we have always been open to new opportunities for collaboration. Aerofest provides us with the ideal platform to continue to showcase local art and organizations to the region and the nation while also enabling us to impact the lives of our nation’s heroes.”

"Mobile Aerofest is thrilled to have Arts Alive! as a founding partner,” said Aerofest co-founder Dave Glassman.  "Arts Alive! and the Aerofest were both created to promote the best of Mobile while impacting our community in a positive and lasting way—together I know we will become far greater than the sum of our parts individually.”

The Arts Alive! Festival will play a prominent role in the diverse array of experiences and interactive events offered at Aerofest.  Wounded veterans and all festival attendees will have the opportunity to participate in a variety of interactive art activities and learn hands-on about creating within a wide variety of artistic mediums.  The Festival will occupy space in the Brookley Village area of the Mobile Aeroplex and will include the traditional Arts Alive! elements of a performing arts showcase, a visual arts show and sale, and a full schedule of musical performances.

"Our partnership with Aerofest will empower Arts Alive! to greatly expand the interconnectivity that we bring to the community at large by reaching new members of our community and a broader audience in the region,” added Calametti.  "We are very proud of the role that Arts Alive! has played in our downtown development and are excited to be part of the next important chapter in the continuing growth of our city taking place at the Mobile Aeroplex.”

Mobile Aerofest is a multifaceted annual festival taking place at the Mobile Aeroplex on March 20 – 21 2015.  The Festival’s mission is to actively improve the lives of America’s injured warriors through a confluence of talent, vision and technology never been seen before in the production of a live event.