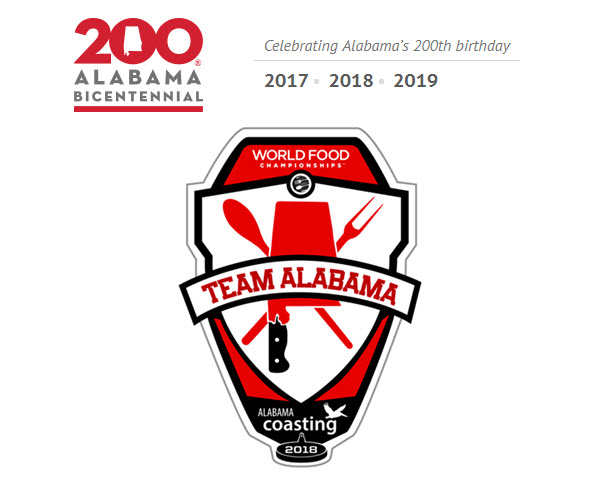 The Alabama Bicentennial Commission has joined in support of Alabama Coasting’s search to field WFC Team Alabama to compete in the 2018 World Food Championships this November in Orange Beach.

The World Food Championships (WFC), now in its seventh year overall and third in Orange Beach, is the largest Food Sport event in the world! Some 450 teams from 40+ states and 13 countries compete annually for a total prize purse of $300,000 and the ultimate title of World Food Champion. However, before a competitor can challenge the world, they must earn a seat by winning a certified WFC qualifying event. Alabama Coasting, as WFC State Partner, is responsible for coordinating and sanctioning all state related WFC activities. This includes sponsoring and/or endorsing exclusive WFC qualifying events, hosting certified judging classes, and creating other WFC "chef-centric" events throughout Alabama.

“This statewide culinary campaign dovetails nicely with our goals of honoring our people in 2018 and telling our stories in 2019,” said Jay Lamar, Alabama Bicentennial Executive Director. “There are a lot of ancillary benefits that will come out of this initiative such as recognizing those from past generations on which our Alabama food legacy is built and perhaps unearthing our heritage recipes.” Lamar adds, “Alabama 200 is proud to partner with Alabama Coasting and is looking forward to our collaborations.”

“Along the way, we’ll discover our new culinary icons and help to rediscover the stories of our rich and diverse Alabama culinary heritage.”

Learn more about the 2018 World Food Championships and WFC TEAM ALABAMA at their website, www.wfcteamalabama.com.